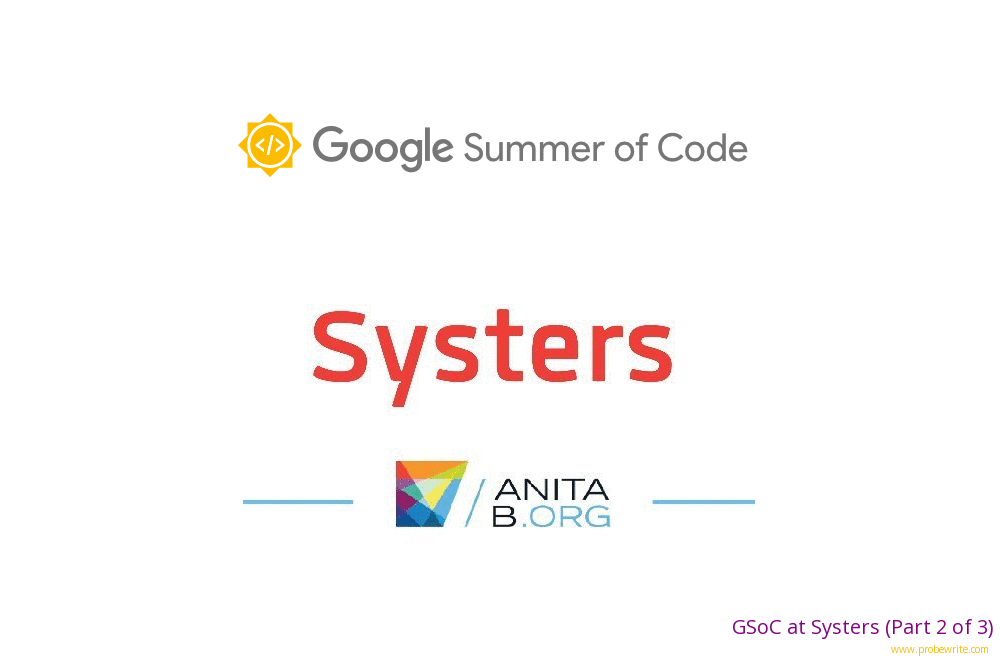 Here we are again! welcome to part 2 of my GSoC at Systers series. If you just bumped on this please do read GSoC at Systers Part 1 before heading back! (Don’t worry there’s a pointer link to part 2 in part 1). So just as promised in part 1, I will be talking about the application process, the project selected, my GSoC mentors (project guides/supervisors) and finally my project manager, GSoC administrators and other very resourceful GSoC mentors (mentoring other students) who I just have to mention here.

So what about the application process?

GSoC selections like many other selection schemes is competitive as you may already know, organizations are trying to get the most appropriate students for their projects. Due to this, participating organizations set in rules which are very specific. Each organization has its guidelines. Of course after learning about the organization from the GSoC website the next step is looking at the idea list or GSoC page and perhaps getting in touch with the community.

For Systers, the first step towards joining the community irrespective of wether it’s for GSoC or not is is to join their (now our) open source slack space which is used as the primary tool for communication. After that, new comers are expected to read the code of conduct and indicate in the code-of-conduct channel that it has been done by writing “I have read the code of conduct” next the new community member is expected to update his/her slack profile according to community guidelines (GSoC aspirants are expected to set their what-I-do to “GSoC Aspirant” for example) and make a personal introduction in the intro channel. After this, ideally a GSoC aspirant should head back to the idea page and pick out projects of interest if that has not already been done. Start a proposal and #IMMEDIATELY share the draft as soon as there’s enough reasonable material that need feedback.

It’s a little less completed at Systers because there’s a proposal template, it’s great and I think its a resource that can be shared in a GSoC training so students can tweak it a little and use in organizations that don’t provide templates. After sharing a draft mentors would drop their feedback students are expected to improve their proposals continuesly until they feel is good enough to be submitted (its never good enough) most students submit towards the dateline but should ideally not be on the dateline as many unexpected things can happen.

During that period it's very vital for the students to communicate in the community frequently and try solving new-comer issues to stay active. It’s worth noting that at Systers there's a GSoC interview for prospective students. To keep the length of this article reasonable I will share the amazing experience of my interview in the next post.

Learnt about Systers 1 week to the deadline of proposal submissions for GSoC 2018 from a friend and reluctantly I took a look! He told me of two projects and I knew a whole lot of other organizations but Systers was interesting because python (I needed the opportunity to improve my python skillset) is one of the languages used and their objective as an organization was quite straight forward so boom I started my proposal of course after fulfilling most of the requirements above (I remember not using the proposal template and my first feedback was “update to proposal template” that was quite confusing, had not read enough lol).

My proposal had two parts including API Development for Portal and Upgrade Portal UI to match Anitab.org branding. This covered the idea(s) from idea list list which suggested a communication method is need between two of the organizations' platforms (VMS and Portal) and that the Portal UI needed to be updated to match with the new Anitab.org (mother organization) branding. Howver after submiting my draft very late, 5 days to the dateline I got early and multiple feeback I improved my proposal continuesly for two days more and felt it was ok for submission (I waited for more feedback though) but again I had three more days and I was not sure what exactly I would be doing so I decided to write a second proposal to increase my chances.

So I asked in the community for projects that are important but were not getting enough attention and some other GSoC aspirants who joined earlier (@geekanamika and @abhijit) said the admins had mentiond Photo Language Translation and Infrastucture Automation. After taking a look I decided to go for Infrastrcutre Automaction bearing in mind that my machine learning skills are a little rusty for the later. So I wrote my second proposal Infrastucture Automation Python which turned out to the selected proposal. It was a lot easier as I had the proposal template containing the general questions which I already answered in my first proposal and remains unchanged for every proposal. This was the one proposal I learnt so much writing! It’s kind of a DevOps project and along side my interview experience more light about what exactly this project is about will be thrown in the next post.

Right from the application period we had already started interacting with mentors and admins and at that time mentors provided help for students irrespective of the project they were likely to mentor! I must say it's the amazing mentors in the community that keeps the students and can allow the organization to have upto 14 students a very rare number for most GSoC organizations! (Wikipedia had just six students!) Similarly the organization had 11 students last year, clearly the hardwork is not new! My project mentors Mona Jalal and Meha Kaushik two very interesting and collaborative ladies are working with our project manager Prachi Manchanda, another amazing lady to ensure that I have successful sumer ahead. Other very resourceful admins and mentor that have been so amazing all through include Maybelin Burgos, Ramit Sawney, and Ajat Prabha(contributor). There are several other mentors and admins doing great work also.

And that’s it for part 2. In part 3, the concluding blog post for the community bonding period I shall share my interview experience, give details about the project and talk about extra things which helped during the application period. Hola!